Potential and challenges for edamame beans in Norway 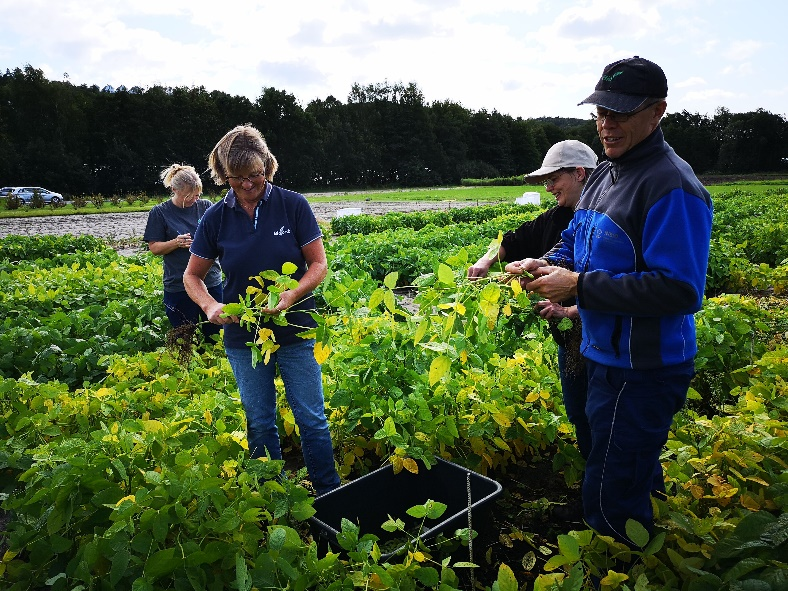 Edamame is the Japanese name for vegetable soybeans. Normal soybeans are harvested when their seeds are fully mature and seed water content is low. Vegetable soybeans are harvested earlier in the maturation process, when the seeds are large enough to fill the pod, but still juicy and bright green. At this stage, the level of free amino acids is high, and the seeds have a pleasant smooth texture and a nutty sweet-ish flavour. Vegetable soybeans have been grown in China and Japan for hundreds of years. They are cultivars or strains of soybeans that differ from normal soybeans by having bigger and more intensely green seeds, and a milder sweeter taste. The pods are also bigger, greener and less “hairy”. During the last few decades, edamame has gained popularity also in Western countries, particularly in the USA. 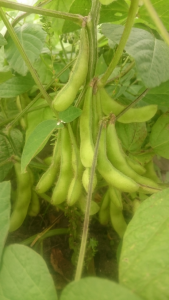 Vegetable soybean (edamame) pods on the plant, close to harvest. From cultivar trial at Landvik, Grimstad 2019. Pubescence (hairs) should be as light coloured as possible, for an attractive appearance. Photo: Ingunn M. Vågen 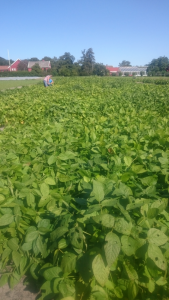 Plant protein is normally associated with dry mature seeds of legume crops like peas, faba beans, lupins and soybeans. But legume crops in vegetable version are also very good sources of protein, and additionally provide vitamins, minerals and health-beneficial phytochemicals, just like other vegetable crops. One of the tasks in WP2 is to look at possibilities and constraints for vegetable legumes in Norway, like vegetable soybeans and faba beans. Vegetable faba beans (more commonly called broad beans because of their larger seed size) are grown to a small extent in Norway, but most consumers don’t know them. Vegetable soybeans have been even more unknown in Norway, and it has been assumed that it’s not possible to grow them in commercial agriculture because of our cool climate and short growing season. Prior to the start of the FoodProFuture project, NIBIO started a small scale research activity on vegetable soybeans in 2016, in collaboration with the companies Gartnerhallen and BAMA, who are industry partners in FPF. The results were promising enough to include vegetable soybeans in the FPF project plan.

Soya is a sub-tropical plant and requires high temperatures and a long growing season to develop well. The main challenges for us are
• daylength sensitivity
• temperature sensitivity: tolerance to low temperatures at germination and during growth and pod formation
• short harvest window: this is a challenge for fresh marketing
A major challenge is then to find cultivars that are suited to our climate and growing conditions, and to find the best crop management strategies.

Since the start of the FPF project, we have in WP2 been searching for vegetable soybean cultivars around the world, and tested them in field trials. If we want to establish commercial production of this crop in Norway, this testing is vital. Some of the cultivars we’ve tested are promising, and others unsuitable. We also use field trials to evaluate the interaction between environmental factors, like light and temperature, with the plant’s phenological stages and crop development.

Table 1 shows an outline of sowing and first and last harvest dates during 4 years of edamame field trials, and the amount of day-degrees between sowing and first harvest. In 2017, sowing was done very late due to delays in seed supply. This led to an extremely late harvest time, and confirms what we know from several other crops, that a little delay in the beginning of the cropping period may lead to large delays of harvesting. For vegetable soybeans, this means we have to balance an early sowing date with the crop’s demand for high soil temperatures for good germination.

In 2019, we were able to include a number of new cultivars in field trial that look very promising. Some data from this trial is shown in figure 1. The earliest cultivar was ready to harvest around two weeks earlier than the latest cultivar in the trial. There was not necessarily a connection between early flowering or visible pods and early maturity. The earliest maturing cultivars also had high marketable yield. The latest maturing cultivars had lower yield, and a much higher percentage of the yield was not marketable quality. This doesn’t necessarily mean that the late cultivars are bad, but underlines that Norway is a marginal area for edamame production, and that our growing season is only just long enough. It also shows why cultivar choice is so important. Luckily for us, the interest for soya production in cool climates is increasing in Europe, and currently, European plant breeders are making efforts for more cold tolerant soya cultivars. Hopefully, this work will also extend to vegetable soybean breeding.

In 2020, we plan to do new cultivar trials with the cultivars from 2019, in two locations (Ås and Grimstad). By the end of the FPF project next year, our aim is to deliver solid advice on cultivar choice and crop management for edamame in Norway.

To make vegetable soybean production economically viable, harvesting and grading should be done mechanically. Equipment and knowledge for this still needs to be acquired from abroad, adapted and implemented, but this is outside the scope of FPF.

To make vegetable soybeans available in the market for more than just a few weeks in the autumn, much of the crop will need to be frozen before further distribution. And since soya is an allergen, legislation requires specific labelling on other products that are handled in the same facility. Who will be doing the freezing/handling of the harvested crop? Do any of the industry partners in FPF see this challenge as an opportunity?

Edamame is a new vegetable crop for Norway, so there is a lot we don’t know about it. How high is the protein content when it’s grown in Norway? What about the free amino acids? Does it differ between cultivars? Does edamame contain anti-nutrients? Do some cultivars taste better than others? What is most important for consumer acceptance of edamame?